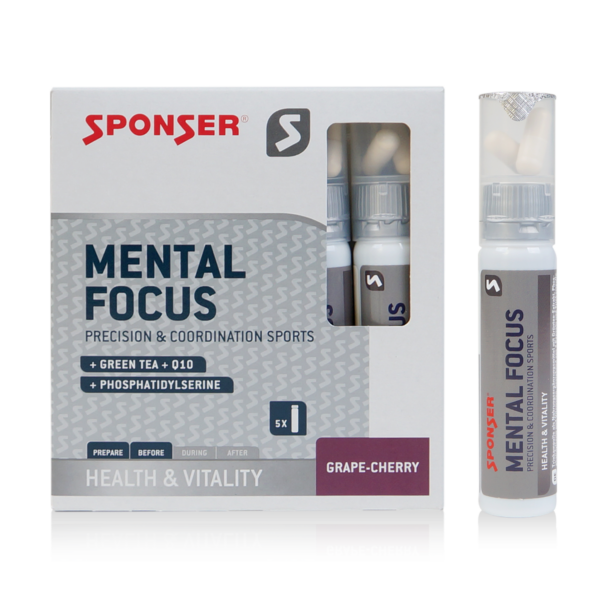 CONVENIENT INTAKE AS A SHOT

Deliberately formulated without caffeine, MENTAL FOCUS does not cause any additional nervousness or tension.
This food supplement is also suitable for office or school, where the functional ingredients contribute to concentration and focus.

Functional ingredients
MENTAL FOCUS is a dietary supplement containing green tea extract (with L-theanine), coenzyme Q10, phosphatidylserine-enriched soy lecithin extract, zinc and 8 vitamins. Vitamins C, B2, B6, B12, folic acid and niacin contribute to the reduction of tiredness and fatigue.

Green tea is traditionally known for its relaxing and calming effects due to its natural ingredients such as catechins (polyphenols) and the amino acid L-theanine. Coenzyme Q10 has a function in the energy supply of the cell and in energy metabolism.

Ginkgo biloba extracts are characterized mainly by the content of secondary plant compounds. Gingko biloba is traditionally known in alternative medicine as an ingredient and is used in food supplements worldwide. However, current food regulations prevent the advertising of Ginkgo biloba and its mode of action in connection with products.

Therefore, inform yourself independently about Gingko biloba on trusted channels on the net.

Developed in Switzerland and produced in Germany.

Be the first to review “MENTAL FOCUS” Cancel reply