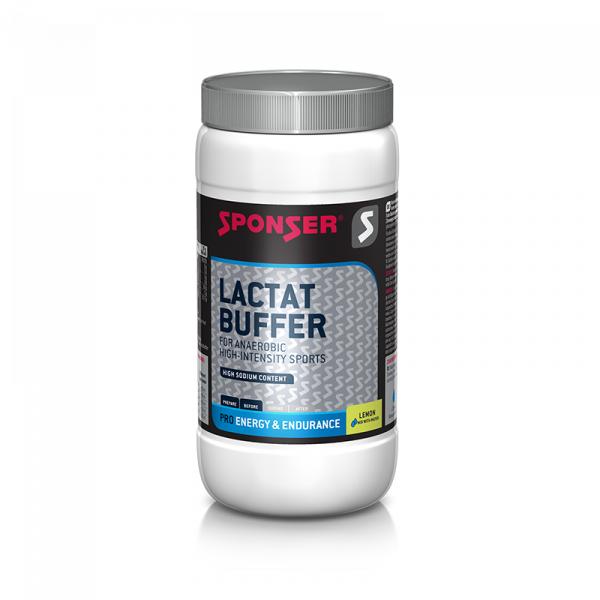 For use at important competitions

LACTAT BUFFER by SPONSER® is a mildly flavoured beverage powder with sodium citrate and bicarbonate for high-intensity, so-called anaerobic-lactacid sports.

During high-intensity exercise, muscle hyperacidity and the consequent accumulation of lactate as well as a short-term drop in blood pH are often performance-limiting factors. The athlete becomes “acidic” and his performance is limited. LACTAT BUFFER provides for an improved “acid buffer capacity” and thus increased lactate tolerance. This means that the athlete, with his individual tolerance of the lactate developed through training adaptation, can longer endure a given load or achieve a higher performance in the same time.

Performance improvements seem to be the more pronounced the stronger the stress induced metabolic hyperacidity (acidosis) is. In practice, the anaerobic stress is more beneficial for accustomed athletes such as middle-distance runners, rowers, swimmers, skiers, etc. than for endurance athletes such as long-distance runners, triathletes or cyclists. This is because in anaerobic sports athletes train lactate tolerance more often than in endurance sports.
Another group of athletes who can potentially benefit from soda loading are those with repetitive interval loads. This applies to many team sports, ball sports and martial arts.

Soda-loading is also interesting for strength athletes, as the isolated training of fewer muscles produces very high local lactate values, which must be removed as quickly as possible. If the muscle remains « sour » for too long, the next set cannot be completed quickly enough and with sufficient strain. Since soda loading also means an increased sodium intake, supplementation in weight training should not be carried out permanently but reserved for intensive phases. The same applies to sports where one or even several competitions take place every week.

Due to the mode of action of an increased bicarbonate buffer in the blood, the individual lactate value of the athlete is not necessarily increased, but primarily the lactate tolerance. This means that the athlete with his individual lactate value can endure a load for a longer time or achieve a higher performance. The athlete does not necessarily interpret the perceived load as lower if the maximum achievable performance in competition is aimed at. In contrast however, a given, defined performance should be perceived as less stressful. In all cases a much faster recovery is to be expected, because the acid removal is accelerated by the increased buffer capacity. This means faster disappearance of the “stiff” muscle feeling after exercise as well as faster recovery.

As early as 1993, a first meta-analysis examined 29 studies on athletes with soda loading. Overall, the performance until exhaustion was massively increased with an average of 27%. Due to the diversity of the study designs, however, also with a large variation of +7% to +47% (average thus +27%).

In the meantime, many other studies have been carried out and soda loading is considered one of the supplementation measures with the scientifically most broadly supported, performance-enhancing effect.

In the past, acute soda loading was practiced about 3 hours before the competition, which was an enormous dosage with a intake of 0.3-0.5 g sodium bicarbonate and/or citrate per kg body weight. This led to gastrointestinal problems very often. According to the latest study findings, supplementation is carried out over several days. Thus the tolerance challenge of a high single dosage can be avoided.

APPLICATION
Acute loading: Approx. 3h before the competition. Compatibility must be tested beforehand.
Ideally take over 3-4 days as recommended.
Drink solution throughout the day.
Last intake 3 hours before the start at the latest, according to the recommended preparation.

Developed and manufactured in Switzerland

Be the first to review “LACTAT BUFFER”