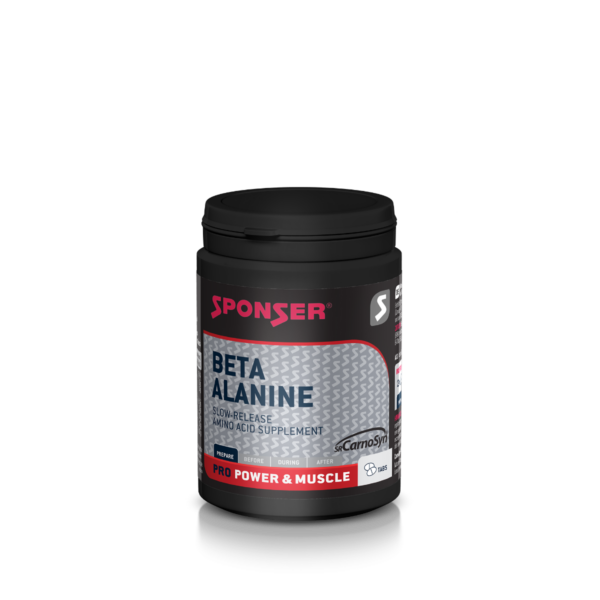 Beta-alanine from SPONSER® is an intracellular acid buffer for competition and strength athletes. Suitable for high-intensity, repetitive exercise, where muscle acidification and the concomitant pH reduction in the blood limit performance.

Due to the improved “acid buffer capacity” beta-alanine provides an increased lactate tolerance. Thus, with one’s lactate tolerance derived by specific exercise, athletes can sustain a given load for a longer time or achieve a higher performance in a predefined time. Furthermore, a significantly faster recovery can be expected because the acid removal from muscle is accelerated by the increased buffer capacity.

Beta-alanine is listed by internationally renowned institutions from sports and nutrition science (Swiss Sports Nutrition Society, Australian Institute of Sport) as a so-called A-supplement with the highest effectiveness.

Which sports benefit?
– Typical anaerobic-lactacid sports:
Swimming, track&field (short and medium distances), rowing, skiing, cross-country skiing (sprint)
– repetitive interval loads:
strength athletes, various team sports (football, hockey), martial arts (karate, judo)
The targeted resistance exercise of isolated muscle groups in strength athletes produces locally very high lactate values, which must be removed as quickly as possible. If the muscle remains sour for too long, the next set cannot be completed quickly enough and with sufficient power.
The performance improvements seem to be all the more pronounced the bigger the load-induced metabolic acidosis. Thus, athletes such as middle distance runners, rowers, swimmers or skiers who are used to anaerobic exercise are expected to benefit more from supplementation than endurance athletes such as long-distance runners, triathletes or cyclists.

Function and mode of action
Beta-alanine as an amino acid supplement increases the muscle’s carnosine level. The most important function of carnosine is to buffer acids. In contrast to extracellular buffering of a soda loading (cf. LACTAT BUFFER), carnosine acts within the cell. Of great interest in this context is the combined application of soda loading and beta-alanine supplementation in order to improve both extracellular and intracellular buffering capacity.

Thanks to the slow-release tablet formulations, the unpleasant (but harmless) tingling sensation of the skin caused by beta-alanine is prevented. Please follow the instructions for use (loading phase).

Tipp: as an intracellular buffer substance beta-alanine is especially suited in combination with the extracellular acid buffer LACTAT BUFFER by SPONSER®.

2 x 2 tablets daily, preferably with a meal. Do not consume more than 8-10 weeks, then discontinue intake for approx. 4 weeks.

Dietary supplements do not substitute a balanced and varied diet. Do not exceed the stated recommended daily dose. Keep out of children’s reach.

Be the first to review “BETA ALANINE”