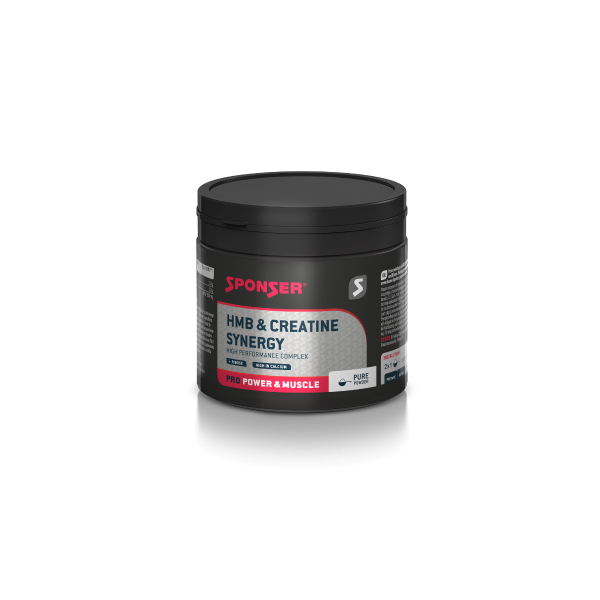 For ambitious strength and endurance athletes

HMB (abbreviation for β-hydroxy-β-methylbutyrate) is a metabolic product of the amino acid L-leucine and thus fulfils a similar function in the anti-catabolic metabolism (muscle maintenance). Muscle maintenance plays a decisive role, especially after sports-related injuries and concomitant bed rest. In contrast to protein, however, HMB is not considered anabolic in function.
Due to their different mechanisms of action, creatine and HMB complement each other ideally in a synergistic way, both in terms of performance enhancement in the anaerobic performance range and in terms of promoting recovery, as has been shown in recent studies.

In a recent study (Fernández-Landa, 2020a) elite rowers completed a lactate level test on the rowing ergometer. After 10 weeks of taking creatine, HMB, creatine+HMB or placebo, it was shown that the combined intake of creatine and HMB resulted in an additional synergistic performance improvement not only compared to placebo, but also compared to the two single supplement groups (at anaerobic threshold, lactate 4 mmol/L and 8 mmol/L).

In addition to these performance parameters, both an increased testosterone and lower cortisol levels could be demonstrated in the supplemented athletes. This confirms the expected positive effects of creatine and HMB on recovery. It is interesting, however, that also with regard to these parameters the two supplements complemented each other synergistically (Fernández-Landa, 2020b)

To round off, HMB & CREATINE SYNERGY also contains ribose and calcium. Ribose is a so-called structural sugar and has its function e.g. in the structure of our RNA and DNA, but also in the formation and storage of ATP. ATP, as an energy carrier, is in turn closely linked to the function and effect of creatine. Finally, calcium also contributes to the normal function of the muscles and energy metabolism.

Preparation
Add 2 x 1 scoop daily to drinks, shakes or other foods.
Ideally divided into 2 servings, on training days before and after exercise.

Application
To achieve a positive effect of creatine, it is necessary to take 3 g per day.
This amount is included in the recommended daily dose (8 g).

Be the first to review “HMB & CREATINE SYNERGY”